Usain Bolt doesn’t need an introduction. Everyone knows he’s the first man to hold both the 100m and 200m world records since fully automatic time became mandatory in such events. He’s been called Lightning Bolt, and it’s easy to understand why, considering he’s an eight-time Olympic gold medallist in short distance races.

For those of you who haven’t heard, Bolt has recently retired from sprinting, at the age of 31, after August’s world championships in London. At the moment, the Jamaican is recovering from a hamstring injury by relaxing and enjoying Guinness beer at his own music and sports bar in Kingston.

When the Irish Mirror asked about his favourite drinks, Bolt replied he doesn’t really have a favourite cocktail, so he mostly drinks Guinness beer. As for food, he loves pork meals, as he’s recently said “any pork dish is fine with me.” He admits having eaten a lot of McDonald’s chicken nuggets while training for the 2008 Olympics but nowadays, he shifted his preferences toward KFC’s hot wings.

Bolt has recently declared he wants to start a career in football. It might be a bit late for that considering he’s 31 years old and he expects some scepticism. Still, Bolt doesn’t want to give up on this childhood dream just yet. There actually are rumours of a trial for Boruissa Dortmund but they have not been confirmed so far.

He’s a big Manchester United fan which is why he’s spoken to former manager Alex Ferguson on the phone about his wish. Bolt wasn’t taking it very seriously but it was worth a shot. In fact, Ferguson suggested him to get in shape and they’ll talk about it later.

Bolt admitted his national team wasn’t great at football since they didn’t even qualify for the World Cup. Anyway, regardless of how the football thing goes, he wants to work with the IAAF to promote athletics, but doesn’t want to become a coach. 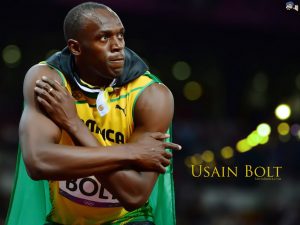